Nearing the conclusion of Phase 2 human trials, our lead drug targets chronic pain and inflammation arising from a wide range of conditions...

ATB-346 is a novel anti-inflammatory drug that releases hydrogen sulfide. It has shown unequivocal superiority to naproxen in gastrointestinal safety in a large Phase 2B double-blind clinical trial. This human data replicated the results of preclinical studies, indicating that Antibe has surmounted the main barrier to the non-addictive control of pain and inflammation. The drug is now undergoing a Phase 2B dose-ranging, efficacy clinical trial, the final study in Phase 2 development, with last patient enrollment slated for Q4 2019.

As the standard first-line treatment for osteoarthritis, rheumatoid arthritis, ankylosing spondylitis, and general pain reduction, naproxen and other NSAIDs are effective, but can induce ulceration and bleeding of the digestive tract, with much higher incidence in patients with co-morbidities and in the elderly. In these patients, COX-2 selective NSAIDs (e.g., celecoxib) offer only a modest improvement in terms of gastrointestinal safety, but their use is associated with significant cardiovascular toxicity.

ATB-346 remained gastrointestinal-safe when given to animals with compromised mucosal defence or pre-existing ulcers—situations in which selective COX-2 inhibitors cause ulcers and bleeding in humans. It also remained safe when co-administered with aspirin, which markedly elevates the risk of damage when taken to address the cardiovascular risks of COX-2 inhibitors. ATB-346 also did not elevate blood pressure when administered acutely to hypertensive rats, in contrast to a significant hypertensive effect with naproxen.

Antibe received approval from Health Canada in August 2017 to conduct a Phase 2, double-blind gastrointestinal safety trial of ATB-346 in 244 healthy volunteers. The study was designed to demonstrate the superiority of ATB-346 compared to naproxen, the most prescribed NSAID in the US. One group was treated for fourteen days with ATB-346 (250 mg once daily), while the other group was treated for the same period with the standard prescription dose of naproxen (500 mg twice daily, totaling 1,000 mg per day). The primary endpoint for the study was the incidence of gastric or duodenal ulcers of at least 3 mm diameter with unequivocal depth, considered the “gold standard” in assessing the gastrointestinal safety of NSAIDs.

In March 2019, Antibe commenced a Phase 2B dose-ranging, efficacy study designed to validate the efficacy of ATB-346 in reducing pain and to establish the dose for Phase 3 development. This is a large study, involving 35 sites and a total of 360 patients with osteoarthritis of the knee. Subjects are being randomized to placebo or one of three doses of ATB-346 administered once daily: 150 mg, 200 mg or 250 mg. The primary endpoint is the change in the WOMAC pain subscore (the standard in clinical pain assessment) over a fourteen-day treatment period. Last patient enrollment is slated for Q4 2019.

The study is looking to replicate the success of an earlier Phase 2A open label, efficacy study that was concluded in August 2016. The primary endpoint of that study was the clinical assessment of pain measured at three time points over the ten day course of treatment at 250 mg once daily (n = 12). This produced a WOMAC pain score reduction of 7.6 units on day 10, at a very high level of statistical significance in comparison to baseline pain (p<0.001). In contrast, published studies have provided evidence that the average reduction of WOMAC pain scores observed with the most commonly prescribed NSAIDs (naproxen and celecoxib) for treating OA is ~4 units.(1)(2) 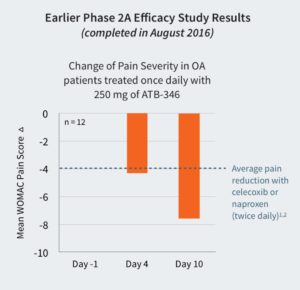