WHO Building a Pipeline of Safer, Non-addictive Therapeutics For Pain and Inflammation

Antibe has surmounted the main barrier to safer, non-addictive treatment of pain and inflammation.

Antibe’s drug pipeline targets large markets in non-addictive pain management. Our lead drug, now in late Phase 2B trials, has demonstrated unprecedented safety in the treatment of chronic pain, a condition that affects hundreds of millions of people worldwide. Our second pipeline drug is designed to replace opioids for post-operative pain, directly addressing a worldwide public health crisis. Over the longer term, we will exploit our platform to create new drugs addressing a range of inflammation-based diseases.

We generate revenue through our wholly owned subsidiary, Citagenix Inc., a worldwide distributor of regenerative medicine products for dentists, periodontists and oral surgeons.

Nonsteroidal anti-inflammatory drugs (NSAIDs) are the main class of drugs used to treat disorders characterized by pain and inflammation, with global sales exceeding $15 billion annually. While highly effective, they cause clinically significant gastrointestinal bleeding and ulcers in approximately 25% of users. Despite this longstanding issue, their effectiveness and non-addictive nature position them as drugs-of-choice for physicians and consumers worldwide, with almost a billion tablets taken each day.*  Notably, NSAIDs have been shown to be as effective as opioids for many types of pain, but are often contraindicated due to the risk of significant gastrointestinal bleeding.

Antibe’s platform targets this major medical problem. By linking a hydrogen sulfide-releasing molecule to an NSAID, we have developed a new generation of best-in-class NSAIDs, delivering anti-inflammatory and pain-relieving effects without damage to the digestive tract. Additionally, clinical trials of our lead drug indicate an opportunity for once-daily administration of a single tablet, as opposed to the requirement for multiple daily dosing with existing NSAIDs.

………………………………..
* Consumers are familiar with aspirin and brands like Advil (ibuprofen), Aleve (naproxen), and Celebrex (celecoxib). Less well-known, the category includes drugs like diclofenac, ketoprofen, and ketorolac. These drugs are effective in reducing severe pain, but with correspondingly more damage to the digestive tract. 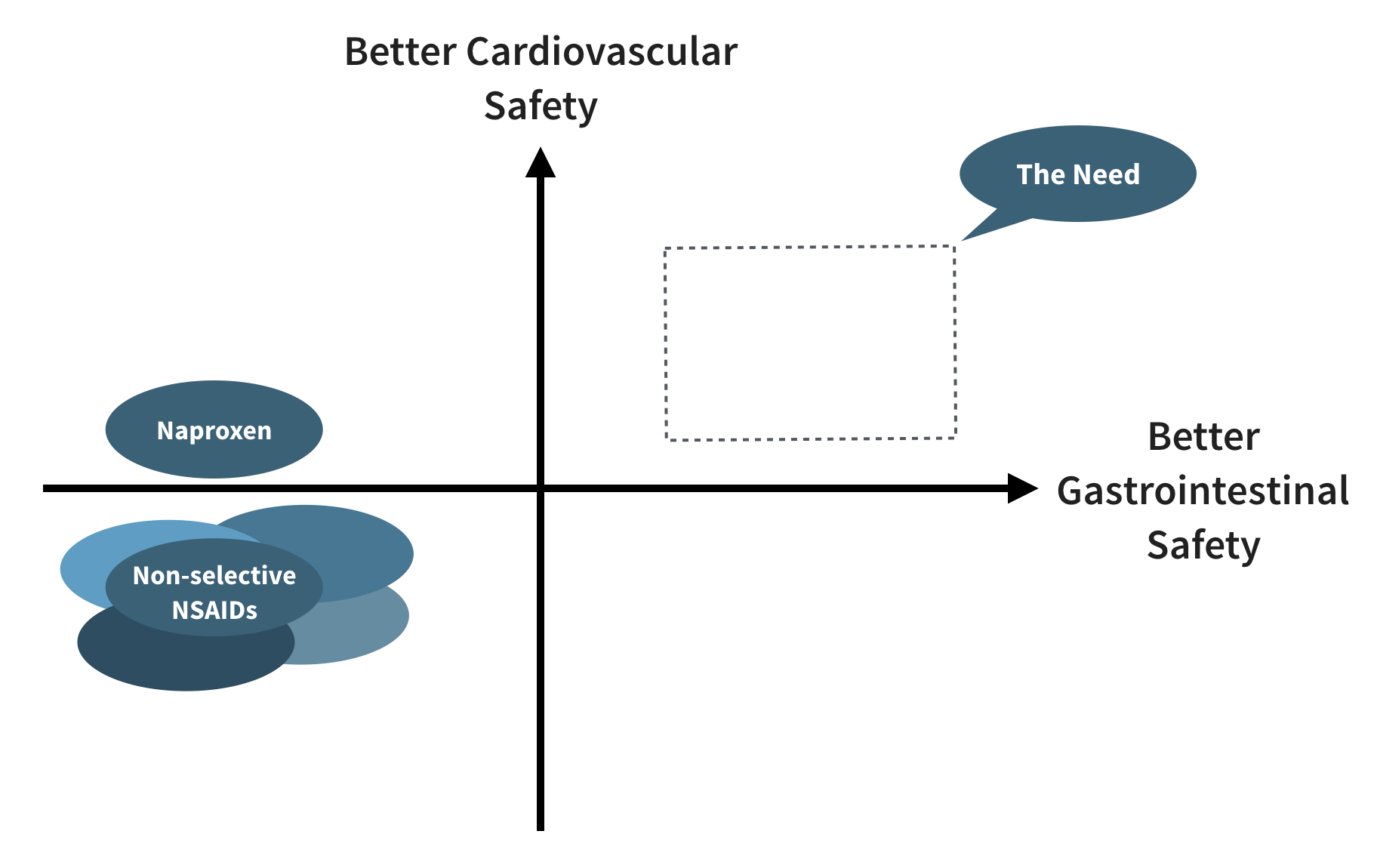 NSAIDs have become the dominant category for treating pain and inflammation. While they are known to be effective, they also pose serious, widely recognized gastrointestinal risks. Protecting the digestive tract without compromising cardiovascular health is the primary market need (upper right quadrant). 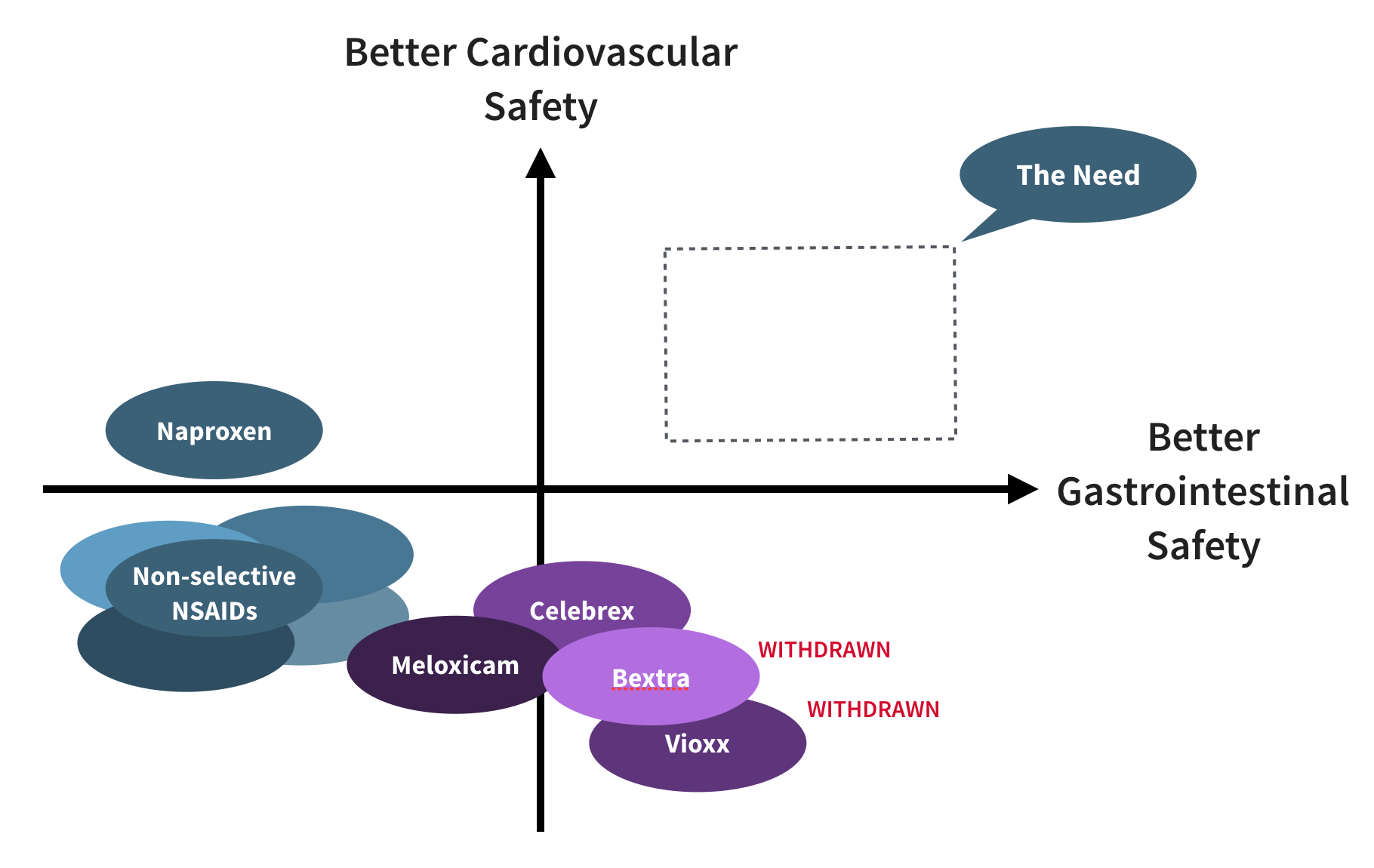 Beginning in the late 1990s, “COX-2 selective” NSAIDs were introduced to improve gastrointestinal safety. They were rapidly adopted, with two products reaching $1 billion in first year sales. However, most were later withdrawn or discontinued due to severe cardiovascular events. 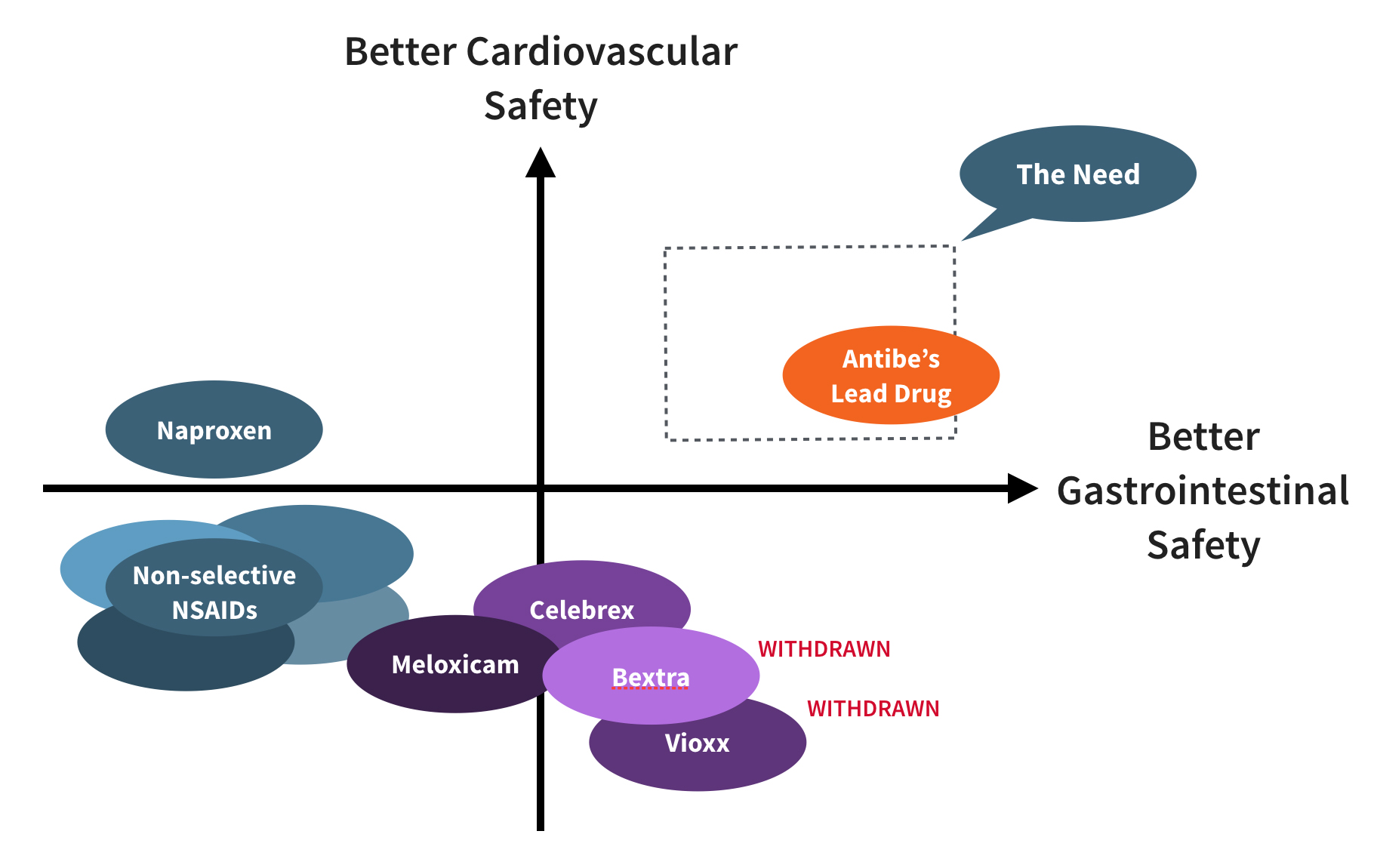 Now in late Phase 2 trials, ATB-346 has already demonstrated dramatic gastrointestinal safety compared to naproxen, the most prescribed NSAID in the US.

ATB-346, our lead drug, targets chronic pain and inflammation arising from a wide range of medical conditions. In March 2018, it was shown to be unequivocally superior to naproxen in gastrointestinal safety (a 2.5% ulceration rate, compared to 42.1% for naproxen) in a Phase 2B double-blind, head-to-head clinical trial (see recent paper in the British Journal of Pharmacology). These results indicate that Antibe has surmounted the main barrier to non-addictive control of pain and inflammation.

Intellectual property
Antibe’s intellectual property interest in ATB-346 is well-protected. Composition of matter patents have been granted in major markets, including the US, the EU and Japan. Antibe anticipates exclusive market protection in the US beyond 2031, and in the EU beyond 2033.

Commercialization
ATB-346 has already been licensed in 57 countries to three licensees (see map below). These markets include Canada, Greece, Israel, and Russia. The most recent is an exclusive license for the South Korean market, representing 2% of the global NSAID market. This arrangement includes US$10 million in milestone payments and a double-digit royalty.

LEARN MORE ABOUT ATB-346 AND OUR PIPELINE

Our second pipeline drug, ATB-352, targets the urgent global need for a non-addictive analgesic for severe pain, particularly in the post-operative setting, where many opioid addictions begin. ATB-352 is undergoing IND-enabling studies, with Phase 1 trials set to begin in late 2020. 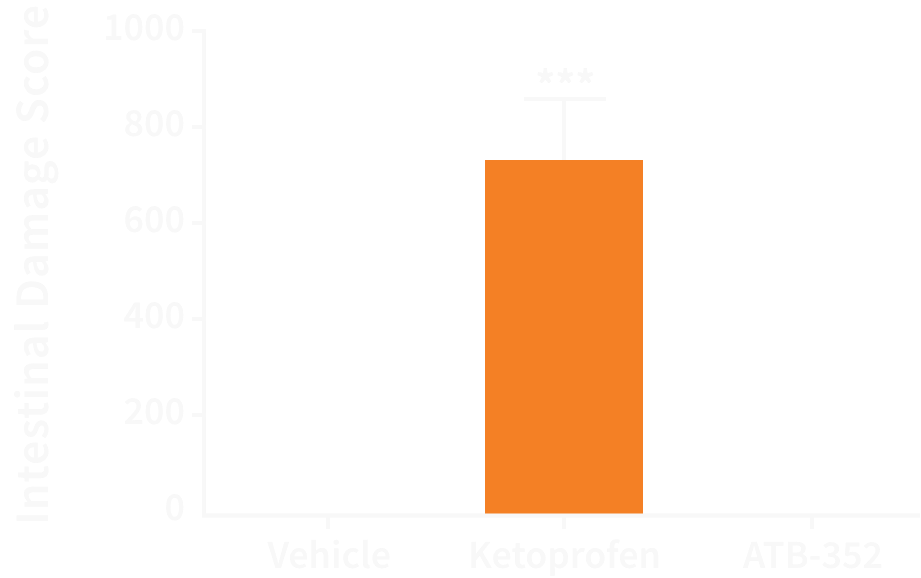 Our third pipeline drug, ATB-340, is a gastrointestinal-safe derivative of aspirin for daily use in the prevention of cardiovascular disease and cancer.

Aspirin, but not ATB-340, causes significant bleeding in the rat stomach. 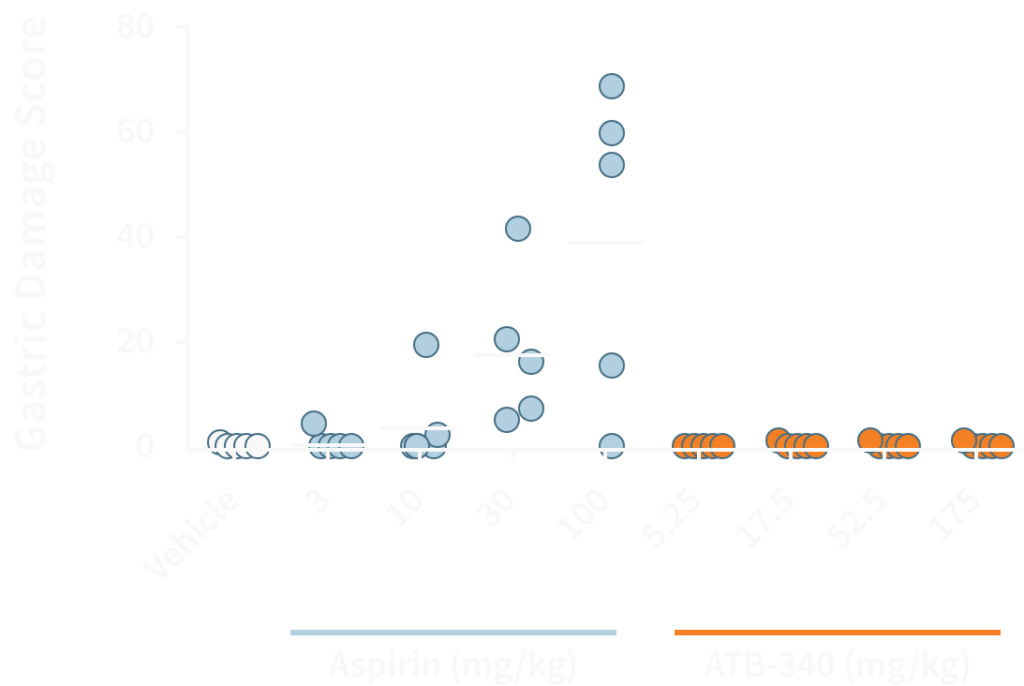 Antibe’s drug platform reflects two decades of research by our founder and Chief Scientific Officer, Dr. John L. Wallace, and his colleagues in laboratories around the world. Our research program is overseen by Scientific and Clinical Advisory Boards, comprising fourteen internationally renowned scientists and clinicians, with specialties in pharmacology, gastroenterology, cardiology, and a range of inflammation-based diseases. Antibe strives for the most rigorous level of scientific validation—clinical trials for our lead drug have involved almost 750 participants, including 360 subjects across 35 sites in our current Phase 2B dose-ranging, efficacy study.

LEARN MORE ABOUT OUR SCIENCE

Beginning with our family of NSAIDs, we are building a broad drug pipeline, expanding beyond pain and inflammation to include gastrointestinal and aging-related diseases—fulfilling our vision for improving health and quality of life for billions of people.

Antibe’s senior team is based in Toronto, Canada. We are supported by a global network of advisors and subject matter experts covering scientific, clinical and regulatory affairs, investor relations and business development.
MEET our management TEAM

Established shortly after Antibe’s founding in 2009, our Scientific Advisory Board is comprised of senior scientists and physicians working in inflammation science, gastroenterology, pharmacology and cardiology.

In conjunction with launching clinical trials in 2014, we formed our Clinical Advisory Board. Its members are globally recognized medical specialists with substantial experience and expertise in clinical trial protocol design.

With larger partnering discussions coming into view, we recently recruited our Partnering Advisory Team, comprised of executives with senior leadership experience in value creation and partnership in the pharmaceutical sector.